The nonprofit Center for Pet Safety in Reston, Va., has teamed up with auto maker Subaru to run preliminary tests on 11 pet safety belts.

The goal: To figure out which pet restraints work well enough to earn a seal of approval from pet-advocacy groups, which the center hopes will one day set national safety standards. 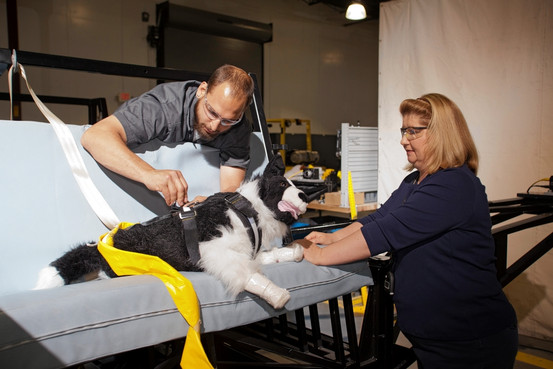 This summer at a private product-testing lab in Virginia, seven of the 11 pet harnesses underwent crash testing. The center designed some of the world’s first crash-test dogs, simulating a 25-pound terrier mix, a 45-pound border collie and a 75-pound golden retriever.

The final results, expected to be released this week, weren’t encouraging. Sleepypod’s Clickit three-point safety harness was the only restraint that consistently kept a dog from launching off the seat. It was also the only one judged to offer substantial protection to all passengers, dog included, in the event of an accident.

Subaru says it will soon offer Sleepypod’s Clickit Utility Harness as an accessory in its vehicles.

The Center for Pet Safety, which says it doesn’t receive any funding or free products from the pet-device industry, is in the first stages of trying to establish a uniform standard to judge all pet restraints.

“It establishes a good baseline,” said Sean Kane, a noted auto-safety researcher with Safety Research & Strategies, who reviewed the study at The Wall Street Journal’s request. The variations in test-dummy size were particularly important, he noted, since larger dogs consistently fared worse in the tests.

An untethered pet can create a safety hazard. Pet advocacy group Bark Buckle Up argues that unrestrained pets act like missiles in accidents, endangering passengers and themselves. In one calculation by motorist-advocacy group AAA, even a 10-pound unrestrained dog in a crash at only 30 miles an hour will exert roughly 300 pounds of force.

Law-enforcement groups say an injured or disoriented pet thrown from a car crash can turn violent or impede rescue efforts.

Several pet-restraint manufacturers say consumers should be cautious of these early test results. The firms say they crash-test their products at accredited facilities. The devices, however, aren’t tested by the American Pet Products Association, the federal government, traffic-safety groups or other product-safety groups.

“Our members are continuously striving to develop products that enhance the lives, health and safety of pets,” says Bob Vetere, chief executive of the American Pet Products Association, who says he hopes consumers will continue using pet restraints.

Nearly 90% of U.S. pet owners say they travel with their pets, but few strap them in, despite recommendations from the American Society for the Prevention of Cruelty to Animals and others. Some 17% of drivers surveyed in a 2011 AAA study admitted driving with a pet on their lap.